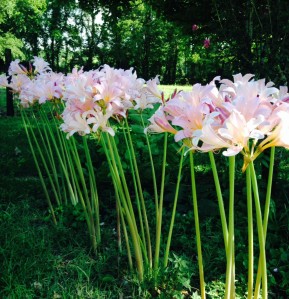 Every year around this time in the summer, dozens of surprise lilies sprout up in our yard.  I’m always intrigued by these flowers, as they seem to pop out of nowhere when you least expect them.  Most plants grow very slowly and gradually, but these lilies seem to leap overnight from a small bud near the ground to a beautiful flower standing two to three feet tall.

The surprise lilies remind me of the surprise blessings God sometimes sends our way.  Recently, my wife was hired for a new job, and it happened rather suddenly.  Although we didn’t really expect it beforehand, God blessed us suddenly.  Like a surprise lily, the opportunity seemingly sprouted up out of nowhere and quickly grew into something beautiful.

There are several references in the Bible to God doing things suddenly.  The apostle Paul experienced several sudden blessings from the Lord in his lifetime, beginning with his initial conversion.  Previously, he was a sinner who severely persecuted Christians.  But one day as he traveled to take Christians captive, a bright light from heaven “suddenly” shone around him, and he began to follow the voice of Jesus (Acts 22:6).

Later in life, Paul was imprisoned for preaching the Gospel with another minister named Silas.  One night in prison, as they were praying and singing hymns to the Lord, “suddenly there was a great earthquake,” and the prison doors and shackles were opened (Acts 16:26, NKJV).  Once again, God demonstrated how He could totally change a situation in an instant.

In the same way, God can completely change your situation in a sudden moment.  You see, sometimes we labor over desires God has put in our hearts with much prayer, anticipation, and waiting to see them come to pass.  But at other times, God may drop a blessing to us so quickly and suddenly that it leaves our heads spinning. Don’t underestimate the ability of God to suddenly transform your situation for the better!

You’ve heard of being blindsided with bad news, but know that you can also be blindsided with good news.  You may not even see God’s blessing coming, but right when you need it the most, He’ll give you the help or answer you need.

Another time Christians experienced the sudden blessing of God was when Christ’s apostles received the outpouring of the Holy Spirit on the Day of Pentecost.  When the disciples came together to pray and seek God, “suddenly there came a sound from heaven, as of a mighty rushing wind … and they were all filled with the Holy Spirit” (Acts 2:2,4).

When onlookers started to question what was going on, Peter declared, “This is that which was spoken by the prophet Joel: ‘And it shall come to pass in the last days, saith God, I will pour out of my Spirit on all flesh’” (Acts 2:16-17, KJV).

It’s interesting to me that something that happened so suddenly was actually prophesied hundreds of years earlier.  That tells me that this was no surprise to God; he had it planned long before that day.  You see, even when something seems like a surprise to us, it’s no surprise to God.  In fact, the psalmist David declared to God, “You saw me before I was born. Every day of my life was recorded in your book. Every moment was laid out before a single day had passed” (Psalm 139:16, NLT).

Surely, God has ordered our steps.  He can suddenly meet our greatest need, and He can suddenly propel us to fulfill our destiny!  So, get ready for the sudden move of God!