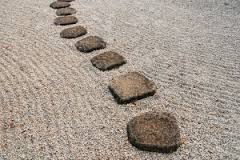 As you envision what 2015 will hold, I hope you see visions of achieving great things for God. However, with your visions of greatness, be sure to appreciate the small steps that lead to the completion of the full vision. God shared such a message to Zerubbabel through the prophet Zechariah. As I shared last week, Zerubbabel had taken the first steps to obey God when he laid the foundation of a new temple in Jerusalem. However, after this initial start, he abandoned the work for a while, and the rebuilding project remained unfinished. Still, when God encouraged Zerubbabel to continue the work on the temple, He instructed, “Do not despise these small beginnings” (Zech. 4:10, NLT).

Before Zerubbabel heard those words, he may have thought to himself, “There’s no use working on the temple again! The only thing completed is the foundation, and there’s still too much left to do!” However, God saw something different; God saw Zerubbabel’s “small start” as a huge first step! Zerubbabel needed to appreciate and celebrate the progress he had made so far, even though it was small. By doing so, he would be encouraged to take more small steps until his dream was eventually fully realized.

We’re the same way! We need to appreciate every victory God has given us, even the “small” ones. Very rarely do “great” things happen all at once. Instead, they are usually achieved through a series of small steps over a long period of time. So, don’t be discouraged if you’ve seen only a little progress toward fulfilling the vision God gave you. Celebrate what He has done for you, and keep stepping in the direction of your dreams. Step by step, you’ll see those dreams come to pass!