With the recent death of evangelist Billy Graham, I’ve been very mindful of his life and legacy.  He was an inspiration to millions, and he impacted countless lives for eternity.  While I never had the privilege of seeing Rev. Graham in person, I do feel somewhat of a personal connection with him, as it was his writing that helped to inspire me to write this weekly column.

A few years ago, I started writing some devotional messages and sharing them online.  Then, I decided to explore other ways to reach people who might not otherwise hear the Gospel message.  I had seen messages from Billy Graham and other ministers in newspapers, and I had the desire to pursue the same possibility.

I remember sharing my desire with our church during a Wednesday night prayer meeting.  I said God had given me the desire to be “like Billy Graham” and have writings shared in the newspaper. I asked my church family to agree with me that the right doors would open at the right time.

While I was nervous about pursuing this new area of ministry, I really felt that God had called me to do so.  After some conversations with the staff of the Advocate and the Gleaner, both papers began sharing my writings later that year, and this has continued each week for almost three years now.

At times, my column has appeared right alongside Rev. Graham’s, and I consider that to be quite an honor.  In fact, I remember once taking a picture of our columns appearing together, because I thought that was so cool!

Please understand that I don’t think I’ve “arrived” or that I’m a Billy Graham, but I do want to testify that God answers prayer!  I had a desire to be used in an area of ministry similar to a great man of faith like Rev. Graham, and God has allowed that vision to come to pass.  Indeed, “Trust in the LORD, and do good; dwell in the land, and feed on His faithfulness. Delight yourself also in the LORD, and He shall give you the desires of your heart” (Psalm 37:3-4, NKJV).

Over the last few days, I’ve been thinking about something I’ve heard my dad say on several occasions.  Each time we lose someone strong in faith and bold in their witness, more responsibility falls on each of us who remain.  Indeed, that is the case now in the loss of Rev. Graham.

May we all be challenged and inspired to make this declaration our own: “Not that I have already attained, or am already perfected; but I press on, that I may lay hold of that for which Christ Jesus has also laid hold of me. Brethren, I do not count myself to have apprehended, but one thing I do, forgetting those things which are behind and reaching forward to those things which are ahead, I press toward the goal for the prize of the upward call of God in Christ Jesus” (Philippians 3:12-14).  Let’s keep pressing toward the goal! 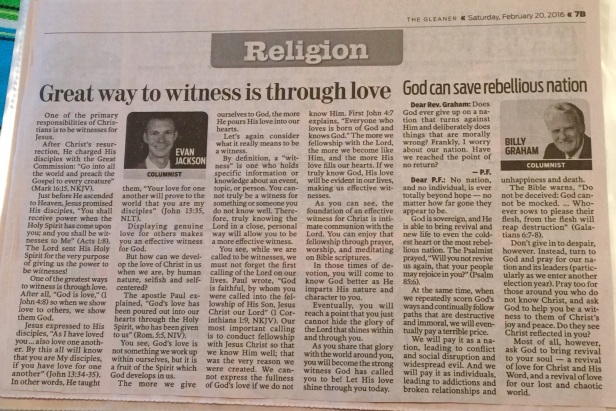